Warning: count(): Parameter must be an array or an object that implements Countable in /home/customer/www/revisitinghaven.com/public_html/wp-content/themes/aimeej/admin/classes/cfmw/init.php on line 746
 A Haven-ly Friday Preview « Revisiting Haven
Recently 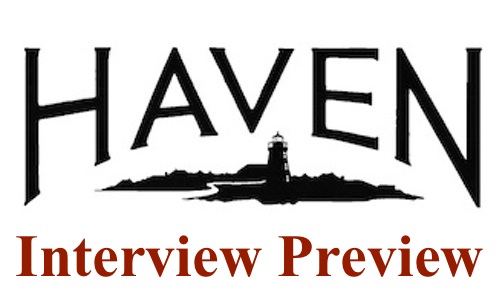 Preview of the things we learned from my interviews with Shawn Pierce, @HavenHerald, and the writers of Haven

ETA on the interviews is end of the weekend (8/3/14). They’ll be released the following week. Check my Twitter for updates and/or changes. Because I may need to push things back if RL intrudes. 🙂 FYI: There is an exclusive Haven package to support the Emmys Foundation. Bidding ends July 31st at 4:03:01 PDT (7:03:01 EST). ALSO, If you want Haven to come to NYCC in some way, shape, or form, you need to let TPTB know! It may not be too late. Even just one actor/actress or a writer or two would be awesome. So let Syfy, eOne, Shawn Piller, HavenHerald, and the rest of TPTB know on Twitter, FB, and Tumblr. Power of the people folks. Let your voice be heard.

Last thing, a trailer for Haven is supposed to be released on Thursday, July 31st. Be excited. 😀 Official Haven Accounts Tumblr: havenherald.tumblr.com Twitter: @HavenHerald Facebook: facebook.com/haven Official Haven Tag: #DiscoverHaven   P.S. I lied. This is the last thing. Charcoal gray Haven T-shirts are available through The Village Emporium.   *TPTB: The Powers That Be

48 responses to “A Haven-ly Friday Preview”