Warning: count(): Parameter must be an array or an object that implements Countable in /home/customer/www/revisitinghaven.com/public_html/wp-content/themes/aimeej/admin/classes/cfmw/init.php on line 746
 Look Back – 4×03 – Well I Didn’t See That Coming « Revisiting Haven
Recently 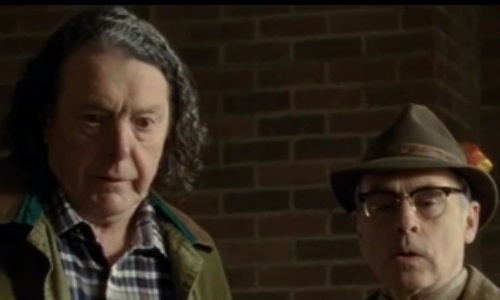 *
*
*
*
*
Clearly, I am not as analytical as some because I did not see the twist at the end coming. My mind went through so many things all at once and then it all made sense.

Kudos Shernold Edwards for a well written episode and an even better twist with a side of why. Kudos also goes out to Kate Kelton for getting us to empathize with Jordan even when we don’t want to.

Once again, I am not doing a comprehensive recap. If you want one, check out the one done by Syfy Haven.

Wade Crocker – I just do not know what to make of this guy. He is so different from Duke and there’s such a “suit” vibe from him that he just doesn’t seem to fit in with the laid back Haven. But he is from the outside so this is to be expected. Jury is still out till we see more of his story.

Jordan – Anyone just flipping over to the show can easily see that Jordan is an angry woman. A-N-G-R-Y. Her trouble is that she is a human taser so she can’t really touch anyone directly without tasering them. You can understand why she would be at the top of the list to want the troubles gone. When Nathan botches the chance for her to be trouble free (even if only for 27 years), you can imagine she is going to be P-O’d. As a viewer you see so much of her anger (following/watching/protecting Nathan, confronting Vince (s4 premiere)), that you forget what she is going through. And it is never more apparent than after Mike touched her and was knocked unconscious.

In that moment, my heart really went out to Jordan. You remember what is driving her actions and why she takes every chance she can get to remind Nathan he better do his part to end the troubles. And why she also reminds Nathan that she will enjoy seeing it happen. So kudos to you Kate Kelton for continually confusing us on how we should feel about Jordan. :p

Blame Game – I’m getting a little tired of everyone reminding Nathan that he is the reason the Troubles are still around. We know and trust me he knows. Dwight asks him the question we are all dying to ask.

Dwight: “How do you know Audrey will do it? Kill you to end the troubles? I mean, she didn’t do it last time.”
Nathan: “I didn’t know about it last time. I’m gonna tell her to.”

Then there’s the opinion of the Guard, especially Vince.

It’s time to let go of old grudges. He’s [Nathan] made mistakes but he’s our only chance.” – Vince

The fact that everyone thinks Audrey will just do what she is told. Audrey has never been a person who liked being told what to do. So being told to kill the man she loves)? Yeah, I’m pretty sure that’s not going to fly.
And, what if she does come back as Lexie? When Audrey was Lucy, it was believed that it was James that needed to be killed. I’m not sure Nathan would fit the bill right away. I am going to go on the record and say I think they’ll connect instantly just like he did with Sarah. I just don’t think Nathan can be killed right away because what if he (and the Guard) are wrong? But when they do make that connection and Nathan is known as the man Lexie loves, I don’t think anyone will be able to convince her to kill him. Underneath it all she has Audrey in her. It’s not going to happen, so what’s the alternative?

The Teagues – The brothers may fight, bicker, and argue but when it comes down to it they are still brothers and there for each other. In the beginning, I admit I was Team Vince but since last season’s finale have switched to Team Dave. Why? Because right now he seems to be the more level headed of the two. Maybe it’s the responsibility on Vince’s shoulders as leader of the Guard that has him so …. uptight.

Vince: “I’m tired of dancing around it. What Nathan did was selfish.
Dave: “His father was our friend. It’s our duty to look out for him.”
Vince: “Nathan wasn’t looking out for Haven when he shot Howard. He was thinking about how much he needed Audrey. Well, Audrey doesn’t exist just for him. I care about her too but I let her go.”
Dave: “I? You mean we don’t you.”
Vince: “No word games. If Nathan had let the cycle continue, the troubles would’ve gone away for 27 years. Then he would have seen Audrey again!”
Vince: “He’s young and rash. But now he’s doing the right thing and Haven has to keep going.”
Dave: “Where we’re going is a morgue in New Hampshire. If Audrey is dead, I’ll never forgive Nathan Wuornos.”

It’s about time we got this all out in the open because ever since we’ve learned about him being the leader of the Guard, I don’t know who Vince is anymore. He acts all high and mighty because he cared for Sarah/Lucy/Audrey and let her go.  I mean why would we forget that you want to keep putting Audrey in a barn as a 27-yr old band-aid. That’s not selfish at all. When it all comes down to it, you just want one thing. The troubles gone no matter how it gets done.

Barn = Bar – Huh. Kudos again Shernold for that reveal and how you revealed it to us. Increasing the voices Jennifer hears and lining it up with what was happening in the barn. The barn is still imploding and Audrey/Lexie needs to escape. If William is another version of Agent Howard (an unconfirmed theory), then who are Sinister man and Heavy? Will everyone be destroyed when the implosion completes? Still so many questions but at least we have one answer. Audrey is still in the barn.

Here’s to hoping we see the reunion of Audrey/Lexie with Nathan and Duke next week because I really miss that dynamic. My guess is that the reunion will be the cliffhanger for next week so I am mentally preparing myself but really:

LOL. I wanted to use that gif. :pI leave you with my usual random thoughts and some quotes. 🙂

Other Quotes (lots of ’em):