Warning: count(): Parameter must be an array or an object that implements Countable in /home/customer/www/revisitinghaven.com/public_html/wp-content/themes/aimeej/admin/classes/cfmw/init.php on line 746
 Look Back – 5×15 – Probably should have used Energizer « Revisiting Haven
Recently

Look Back – 5×15 – Probably should have used Energizer 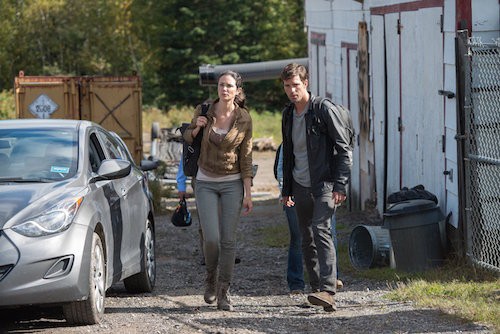 In general a really strong episode to keep the momentum going. It’s interesting that there was no Trouble that was solved. In fact, we have two main troubles, the fog and the dark, that are still unresolved.  This doesn’t count all the other Troubles being triggered or that are out there in Haven.

It’s not easy being in charge

Poor Dwight. I have to apologize, because admittedly I did think he banished the thief leaving him to die at the hands of the dark monster. I blame Adam Higgs for writing this so well and fooling me :p Some type of punishment had to be enacted I guess. A lawless society is not one that would survive long. At the same time, does it not seem the theme of the episode was, “we didn’t want to risk activating more Troubles” or was that just me?

Dwight’s decisions are rubbing Nathan and Audrey the wrong way, and I’m not sure whose side I’m on. Right, sorry, yes I’m on Nathan and Audrey’s, but I do see Dwight’s side even if I don’t agree with it.

Before we go into this, as an aside: Why is it that Nathan is the go to for Trouble fighting, but let’s not listen to his suggestions. I’m not saying he’s right, but some more consideration should be given. But hey, what do I know.

I really like the name of this alley. We gotta suspend belief a little bit, but I think Nathan did have a crack team, except for the engineer. Engineer man was a slacker and should have had some more sense by not just standing there. :p

I feel we saw Nathan and Charlotte grow closer (not romantically :p), but that they have a better understanding of each other. I mean it wasn’t a lot, but it’s something.

Dave, Dave, Dave. We have to talk about your timing for asking questions. You had all that time with Charlotte, you even had your walk back with her (i’m just going to assume you avoided Trouble Alley) and you choose the most time sensitive moment to ask your questions. :p

I totally get why Nathan wanted to find the Aether, I’m just not sure then was the time to do it. But Nathan’s focus is usually on how to help the town, regardless of what other people say.

It’s strange seeing Nathan and Audrey, kinda sorta on the sidelines, because it’s clearly not by choice but yet there they are doing whatever they can to help. Classic Nathan and Audrey. And now that Nathan and Audrey are officially “on” it’s nice to see that their interactions are not being forced onto the screen. Everytime they’ve been together it has made sense and has been a joy to watch as a fan of the couple.

You can take the boy out of Haven, but you can’t take the Haven out of the boy.

Duke made a valiant effort to avoid the Troubles and in the end, he activated one. Props to him for staying legit though, because that could not have been easy. Also for him not losing his cool at the loss of $400k. I would have been a puddle of tears.

Duke’s on the run now and has a Troubled protege with him. What can he do? I wonder if he can even get back into Haven if he wanted. If no one seems to be able to find Haven, Maine is it nonexistent for him as well?

(1) The rings originally belonged to Mara, Charlotte, and Charlotte’s husband.

(2) Dave, Jennifer, and James are halflings! (not the Lord of the Rings kind)

(3) Aether is step 1 to solving the Troubles