Warning: count(): Parameter must be an array or an object that implements Countable in /home/customer/www/revisitinghaven.com/public_html/wp-content/themes/aimeej/admin/classes/cfmw/init.php on line 746
 Review of Haven’s S3E09 – Sarah « Revisiting Haven
Recently 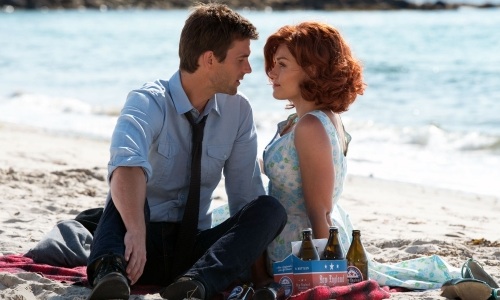 Thanks to my cohost Amy S., who had a saved copy of my review from Sarah!!!

She made my day because to be honest this is one of the reviews I loved. When I left tumblr, I recklessly deleted my posts and lost everything. Note: This is why you should backup your posts. 🙂 Anyway, I’ve never been able to fully verbalize my thoughts about that episode since. But Amy has saved the day and without further ado, here is my original post with only formatting and gifs added.

Going into “Sarah” I was nervous for a few reasons. From the get, I knew this episode was going to be dealing with time travel and Nathan meeting Sarah and the lingering question of who is the Colorado Kid’s father.

The idea of Nathan getting with Sarah just seemed like a betrayal BUT I decided to trust the writers and see how they handled it. Can’t tell you how happy I am that my faith was not misplaced. In this episode you can see how difficult it is not only for Audrey to tell Nathan but also for Nathan to know that he’s going to be losing Audrey.

The writers have said and we know that Audrey is Lucy and is Sarah. So while physically they are 3 separate beings they are the SAME person. Can we just say kudos to Emily Rose for her amazing portrayal of two different people who are the same on the inside! I mean watching this episode I felt like Sarah and Audrey were different but at the same time they were the same. Sarah had a slight accent and dialect that fit with the era she was in but did you see when she confronted Duke’s grandfather? She pulled that gun so fast and so confidently. Also when she confronted Nathan and wanted the truth about what’s going on. Audrey is the same way. She demands the truth and she’s no wilting flower in pulling a gun. I think (and maybe it’s just me) that when Duke agrees with Nathan that it’s not her style to take crap from anyone, that Duke sees Audrey in Sarah.

And I don’t think Nathan saw Sarah as someone totally separate and unrelated to Audrey.

I think that despite Duke’s warning, Nathan saw Audrey in Sarah from the moment she barged into the room and asked him what he was doing. Again, let’s give kudos to Lucas Bryant for a wonderful job of showing the gamut of emotions that Nathan was feeling from when he ran into the Chief as a kid to feeling his ear get pinched to his interactions with Sarah/Audrey. He was thrown off balance seeing Sarah and who can blame him. His best friend and the woman he loves is back in his time but her other identity is there standing in front of him and acting similarly to Audrey. He did his best and Sarah’s BS detector called him on it. He then tries to regroup from not only seeing Sarah but also feeling again after not being able to for so long. Remember, before this he could only feel Audrey and now he can feel Sarah?! The fact that Sarah and Audrey are the same is being solidified for him each moment he spends with her. She confirms it again when he realizes that even as Sarah she is helping people in a different way.

I know from tumblr there are mixed feelings on the whole beach scene and people feel Nathan cheated on Audrey but I don’t buy that.

As I wrote above, IMO, he’s not seeing them separately or at the very least he is having a very, very hard time separating them. And as we saw, Sarah is no shy girl. LOL. I think I couldn’t help chuckling at how forward she was being and based on her experience and the era she was in, I understand. You have to give Nathan credit for trying to walk away. He got further than I thought he would.

Let’s take a moment to ponder all the things that were probably going on in his head.

Let’s put ourselves in Nathan’s shoes for a moment. Somehow you’ve found the will power to pull yourself away after all these thoughts are going through your head. Kudos to you. Not sure how you did it, but props. These thoughts are STILL rushing through your head and you look back just for a second. I’m pretty sure that even though he was seeing Sarah, he was seeing Audrey, the woman he loves and can’t have back in his time and who may disappear before they can make things right. Here she is willing in front of me, willing to be with me. I probably would have jumped at the chance too. Listen, Nathan’s not perfect and he’s a guy in love. I don’t blame him. He didn’t do this on purpose, it’s just how the cards fell. Or you can call it fate. 🙂

As for Duke…the more Duke’s storyline plays out, the more I’m wondering if he can actually fight his fate. :-/ Honestly, I’m not handing out kudos lightly. If you saw this episode, you know that Eric Balfour did a fantastic job playing a grandson torn. I was really feelin’ his struggle. And you can always count on Duke to bring the levity. Eric Balfour delivers one-liners like a pro.

Random other thoughts on this episode:

This entry was posted in Look Back, Season 3 and tagged Tagged: look back, old post, review, sarah on Sunday, October 26th, 2014 .